It's going to cost HOW much?

I just got home from the vet, with an assortment of pills and instructions, a sick dog, and a much lighter wallet. Henry has been vomiting and diarrheaing off and on since Friday night. Today he has bloody diarrhea (sorry, no way to convey that less graphically,) so I rushed home from work and got him right to the vet.

After giving him a complete physical work up, putting him on I.V. fluid, drawing blood, and testing urine, the vet announced it was a total mystery. And then presented me with a bill that will cover the next three payments on her Mercedes. I should have collected money from the folks driving past the vet clinic. I provided them with great entertainment as I knelt behind Henry on the little front lawn, in the pissing rain (catch that pun?) trying to snag some pee in a dipper thingy they gave me.

If he is not better tomorrow, she wants me to bring him in to the clinic in the morning where he will go back on an I.V., have x-rays and who knows what other pricey tests.

Seriously though, the money is not an issue, at least not yet. We just want him to get well. But I've wondered at times what our limit would be to pay for a sick or injured pet. Would there even be one? I suppose there has to be, although I have no idea what it would be, and I am thankful it is not a decision I have ever had to face. I have a friend who sold her car and borrowed thousands of dollars from family and friends to pay vet bills after her beloved dog got hit by a car. Would I go that far? The dog survived, only to die of cancer a year later.

Here is the furry woebegone patient, who is lying beside me on an old sheet. 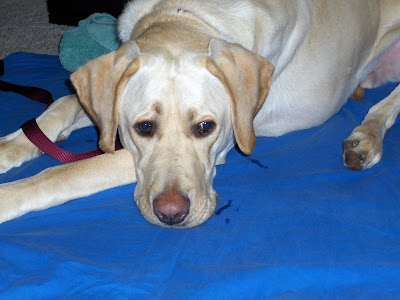 I hope you feel better soon buddy. We have lots of adventures ahead. And I never want to have to choose between you and the mortgage payment. 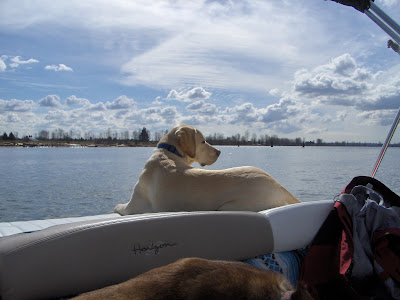 Aw the poor dear! I do hope he gets better soon. He looks like such a sweetie.

Do you not have the option of insuring your pets in Canada? We have this scheme here that only costs a little bit each month (maybe $5-6) and covers things like vet bills. It's always seemed like a good idea to me - I have friends who have been in a similar situation to yours, having to splash out loads of cash for their pets to get well.

Poor Henry... Hope he gets well without your having to pay the vet's mortgage and car.

Poor puppy! It's agonizing to have to make those decisions around a creature you love. On the other hand, my next time around, I'm going to be a vet. Talk about a licence to print money. We have a wonderful vet, but when my cat was sick last year I thought, I could feed a family of five in India for a month on what you are asking for some therapy on a **%$#! cat, as much as I love the cat. How do vets sleep nights?
May your dog get well.

Alda, we do have pet insurance here, but the premiums are very expensive. And with 5 pets in the household it would cost a fortune. So we cross our fingers that vet bills will be infrequent.

Jazz, he seems a little better this morning, even ate some rice.

Ian, my vet may drive a Mercedes, but she has to stick fingers in places they were never meant to go. Be careful what you wish for!

Joe, Let's hope we never have to find out how much is too much.

Thanks for all your good wishes for Henry.

Sadly, we almost had to come to that when we lost our beloved German Shepherd, Emma, a year and a half ago. She was horribly sick, they couldn't find out what was wrong and she was sliding down hill each day. Just before we reached our suffering limit, they figured out what was wrong. It was a combination of things, one of which was rapidly fatal. We'd set a limit of what we could afford, which felt horrible, but at some point there is a limit. More than a dollar. Less than a million dollars. What can you do? Anyway, I really hope Henry gets better very quickly and lives through many more years of adventures with you.

Diana,
It seems Henry will not be costing us an arm and a leg and a car this time. Some kind of pancreatic trouble, but it seems to be clearing up.
V.

It' stough with pets since it is usually out of pocket and you find yourself weighing out the costs versus the benefits. I'm glad to hear from your answer to Diana that Henry is getting better.

That is a toughie. How far to go to take care of a pet. I guess only you know the answer to that.

I hope he gets well soon so you have more adventures together.
Pets love unconditionally. :)

CS and Shari,
Thanks, it looks like Henry is now fully recovered, thanks.