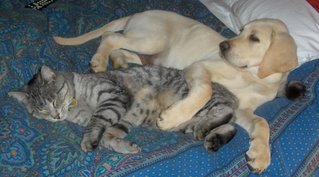 Pets outnumber humans in our household 5 to 3. How that came to be still baffles me sometimes. Tika and Henry are the dogs, Squirt, Snuffy, and Oliver the cats.

Henry and Oliver have been best friends from the first day we brought Henry home as a puppy 13 months ago. It’s an unlikely match. They are from enemy species. Henry now weighs 85 pounds and is still growing. Oliver weighs 9 pounds, if he has had a big breakfast. Oliver is the smartest creature in the household, humans included. Henry is spectacularly stupid. (My Beloved, always the optimist, says Henry is gifted and just needs to mature a little. Nonsense. The only thing he is gifted at is farting. I mean Henry, not B. Although, when we have taco night…….well, never mind.)

In spite of their differences, they adore each other. Oliver gets Henry. In return, Henry smothers Oliver with drooling, doe-eyed devotion. They sleep together. Wrestle and play together. Take walks together daily, Henry on his leash, Oliver voluntarily running along side. Rain or shine. When their paths cross in the house or the yard, they stop whatever important dog or cat work they were pursuing to give each other a little lovin’ and affection. Oliver rubs up under Henry’s chin, Henry licks and nuzzles. Oliver comes out of these sessions soaked in drool.

If Henry and Oliver could go to the UN they would demonstrate profound lessons about acceptance, understanding, and triumph over prejudice. Humankind would learn to live in harmony. And drool, and fart. 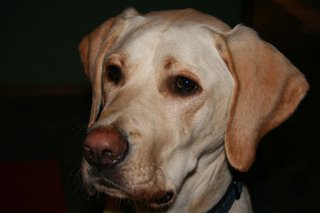 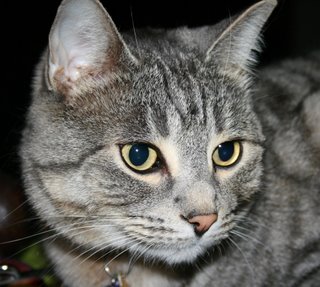 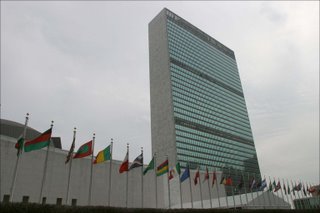 What an adorable couple. Love it!