B and I are reading the weekend paper in what we call the reading room. Which is simply our bedroom on a Sunday morning. There are three animals on the bed with us, a special Sunday morning treat. Normally they are not allowed. Not the dogs anyway, the cats know no rules. I have Snuffy the cat curled up in my lap, Henry warming my toes, a cup of strong tea at hand, and the local news section of the paper.

Suddenly my bliss is shattered.

"Old farts playing softball? What's wrong with that?" asks B.

There it is in black and white. The newspaper ad says that women who will be 50 years old any time in 2007 are eligible. (While men have to be 55. WTF? Women are old timers at 50, but men not so much?)

It hits me like a meteor. A real "holy shit" moment. I will be, gasp, 50 this year. Not for a few months yet, but it is approaching like a runaway train. Of course, I can count, and I have been aware of this coming birthday for, well, almost 50 years. But apparently I have been cruising down De Nile River. I can only blame myself for that. I never went through my forties. Because when I turned forty I told people I was in my late thirties. Then I would coyly say, "thirty-ten." (Actually, I didn't always add that last bit.) The next year I was thirty-eleven. It was funny. Even when I was saying I was thirty-fifteen it got an occasional chuckle. I should have dropped it then, because telling people "I am in my late thirties wink thirty-nineteen," is pathetic.

So, note to self: Chin up, attitude check, embrace reality. Embrace 50. Maybe even join the old timers softball league. But wait, I can't throw or catch a ball.

Today's dream travel destination: Rio de Janeiro. Where facelifts are cheap, and everybody does it. Because soon I will be thirty-twenty. 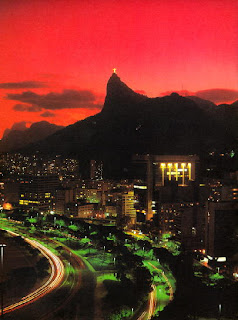 Heh. Nothing wrong with being 50, that's young! But I agree with the going to Rio part, even if it's not for plastic surgery. Go enjoy yourself!

And they prolly lowered the age for women 'cos they didn't have enough players. Women do, after all live longer than men. Weird huh?

Thanks for the comment on my blog. Ooh, I'd love to hear your tales of law school hijinks!

I've got five and a half years to go and I'm dreading it a little bit. In fact I'm often totally broadsided by the fact that I'm, like, heading for menopause and that I've got wrinkles and can't really produce babies so much any more (well, technically I could, but not sure about the night feedings). It's weird, because I feel much younger inside than, say, when I was 25. God's little joke.

Am I wrong to think that most of the other old-timers won't be able to throw or catch, either, so you should go ahead and join--you'd fit right in?! Except, of course, you'd be MUCH younger and lovelier and everyone would be so distracted by your youthful glow that they wouldn't care that you can't hit a ball...

Oh, 50 isn't so bad, especially when you consider the alternative. Another blogger once suggested she tells people she's 10 years older than she actually is, and that way they tell her how marvellous she looks for her age.

OK, seriously, why are the women old timers at 50 and men only at 55? Jazz is not amused.

Oh, that's too funny! (Although, based on your picture, I thought you were still firmly entrenched in your 30's, and not '30-teens'.) As women on average get a few more years of life than men, seems odd that we'd be considered 'senior' younger. Perhaps they have to really stretch to get enough women players?

Angry medic, Umm, actually it looks like you've already had some plastic surgery. Or you were concieved in a nuclear reactor.

Alda I feel younger than I ever did too. Except maybe on Monday mornings.

Jocelyn, Flattery will get you a long way with me!

Ian, you're right of course, the alternative to turning 50 is not so great. And I am aware of that every day, having survived tricky open heart surgery plus 3 more in a seven week period a couple of years ago.

Jazz, as some have commented here, it's probably because the old timers want to get more women out to play, so they broaden the eligibility pool. I hope that's the reason.

Ah, more flattery Diana. Did ya think the reason the photo in my profile section hides most of my face was only for anonymity? Vanity thy name is me.

Judging from the wake-boarding photo in the next post, you can hold your own against anyone. I am more active now than I was as a younger woman and feel better in my own skin. I think things have changed for women - where 50 used to mean somehting very different, and older, than it does now. (We'll see if I'm still saying that in 5 years when I'm approaching 50. Ha!)

Because women are "only" worth their fertility ?