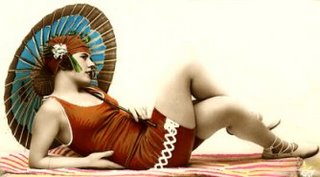 I could not put it off any longer. I’ve procrastinated. Told myself I would deal with it when I loose 5 pounds. Made do with items that should be in the dusting rag bag. I had to take care of this before leaving on our trip. Finally, today, I dragged my ass to…
The Swim Suit Store.

I went to the specialty (read pricey) swimwear shop down town. I found a suit I liked, put it on, and stepped out from the little fluorescent-lit torture room to the three way mirror. SWEET MOTHER OF GOD! There were lumps and jiggly bits falling out everywhere spandex meets skin. Straps disappeared into flesh canals. The worst part is, I am not overweight. Well, not by any rational standards. Sure I’m 10 or 12 pounds more than I was at 20, but that does not account for all the loose stuffing that has appeared increasingly every year since I’ve been travelling the wrong-side-of-40 road.

The saleswoman took one look at me and began bringing me suits. “Try this one dear, many of our mature customers like this style.”
“MATURE? Bite me lady!” I wanted to yell.
I tried on the next suit, and faced her inspection. “Hmmmm” she said, “I think we need a little more bust support.”
I looked at her incredulously. This came from a woman whose matronly bosoms could only be supported by a load of re-bar and 20 years of brassiere engineering research & development.

I had to admit though, she knows her work. Each successive suit she brought me was a little better at camouflage and gravity defiance. Finally, at suit 15, we had found one that I would not be completely mortified to wear in public. Except I did not like the brown and gold colour much, and the pattern even less. I longingly picked up the lovely peacock blue suit I had started with. The price tag was $80. No, I could not spend $80 on a totally unflattering swim suit to wear in an impoverished country.

So, the saleswoman rang up the brown and gold suit. HOLY SHIT! And I thought the blue one was expensive. I guiltily put it on the credit card instead of Interac, so I have a month or so to prepare the Love-Of-My-Life for the shock.

Later, I e-mailed my girlfriend an account of the ordeal. She, being mathematically inclined, explained that there is an exponential relationship between the age of our body and the price of the swim suit needed to show it in public. Design miracles do not come cheap. 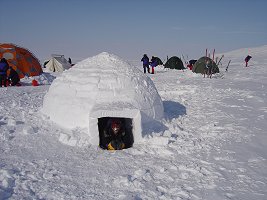 Email ThisBlogThis!Share to TwitterShare to FacebookShare to Pinterest
Labels: over 40, swimsuits

Come now, lots of people swim after making a hole in the ice. Well, some people swim.
Well, OK, I just saw a group on tv once.