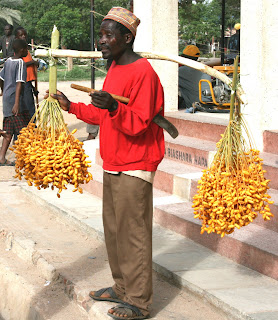 Thursday, December 14, 2006. Dodoma, Tanzania
It is early, just after 6:00 a.m. We were woken at 5:30 by the call to prayer from the Mosque next door. My Beloved sits naked in bed, shrouded by mosquito net. The hotel room Quran rests on his lap. No, he has not gone over to Allah, it is just supporting his journal, which he is writing while listening to the MP3 player. He squeaks and hums tunelessly, occasionally accompanying himself on air guitar. We have been in Africa five days, and it seems B has already completely embraced the "Hakuna Matata" (no worries) spirit. Our everyday world of work, bills, traffic, and housework is long forgotten.

We have been in Dodoma to visit our World Vision sponsored child. Few tourists come to this arid, flat, unscenic area in the very centre of the country. It is nominally the capital, but most government offices, all foreign embassies, and Tanzania's main buisiness centre are still in Dar Es Salaam on the coast. In three days here, we have seen only one other Musungu (white person). At the market, the shops, the bank, and even at our guesthouse, almost no-one knows any English. I do my best in halting Kiswahili, which is met with huge smiles and friendly laughter. There are no touts trying to sell us safaris, carvings or marijuana. The children do not run after us begging for pens or money. We like it here in this colourful, sleepy town. 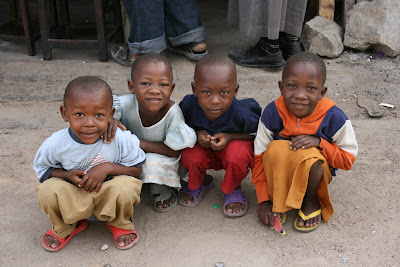 We go out to the big Dodoma market, which is just opening up. Women sweep the dirt in front of their stalls, and set up elaborate pyramids of fruit and vegetables. Men hoist vast loads of banana stalks, or bags of grains and beans from carts. We stumble upon the morning fish market, where some of yesterday's catch from Lake Victoria has been brought overnight. 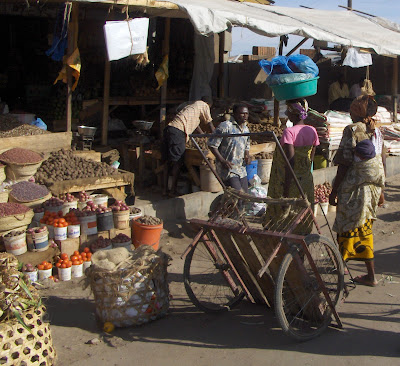 Turning a corner, we come on a heartrending sight: A skinny, dehydrated cat is walking around blindly, a can stuck on its head. Two men are laughing at its ordeal. A third man tries a quick pull at the can, but backs away laughing as the terrified cat hisses and lashes out with its claws. In my head I understand that the life of a feral market cat is of little consequence to people who must struggle to keep their own children alive. But I feel like smacking them anyway. B catches the cat and holds its shoulders while I carefully try to squeeze the lip of the can over its swollen, oozing ears and neck. Now we have drawn a noisy crowd. Surprisingly, the cat goes still as I gently twist and pull. Finally the can pops free, the cat flees, and the chuckling crowd drifts off. Except for one man, who takes my hand with a gentle smile and says "Asante sana" (thank you very much).

Leaving the market with a huge pineapple for breakfast, we are happy. Later today we will fly back to Arusha to meet up with the rest of our friends for the start of a two week safari. We eagerly anticipate some adventure.
That we got...
Posted by Voyager at 11:56 AM