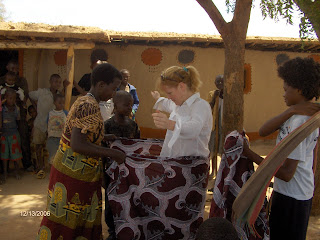 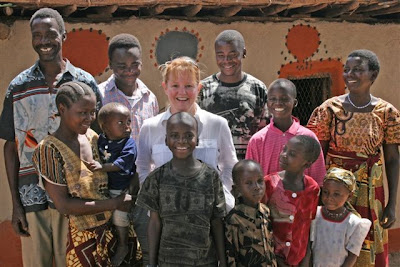 On Wednesday I received the most precious gifts I have ever had the honour to accept. One of them bit me.

I thought the day would be about giving, not receiving. I went to the home of my sponsored child Frank, in a small community outside Dodoma, Tanzania. We had flown to Dodoma from Arusha in a tiny bumble bee of a chartered plane the day before.

Early in the morning we (I, my Beloved, and a friend of ours) were picked up by Emmanuel and Peniel, World Vision staff whom we had met the day before. After tea at the local W.V. project ofice, and a courtesy visit to the local government office, we finally drove to Frank's village. The road was washed out, so we walked the final kilometer in the blazing sun. Past fields being turned by women and children with hoes, and new struggling crops of peanuts, millet and corn. We crossed a dry riverbed where there were two dug out water holes with a few centimeters of cloudy water being collected in buckets and gourds. As I climbed the far riverbank I saw a small family compound of two mud buildings surrounded by a fence of thorn branches. A little boy ran out of the compound, down the path toward us. Frank. My heart lept. When he reached me, Frank silently looked up at me with his amazing big brown eyes, and gripped my hand tight.

I said: "Habari Frank, naferahi kukutana na wewe." (How are you Frank, I am very happy to meet you.) Not a word in reply. Just a giant smile and a vice grip on my hand as he turned and led me to his home. The next few hours are an intense, joyous blur. I was introduced to Frank's 6 siblings, some half siblings, his sister and her children, his Mama and Baba, and his Grandmother, who I greeted with the respectful "Shikamoo". He showed me inside his house. Three rooms of mud walls, with dirt floors. But walls lovingly decorated with designs in coloured mud by his Mama. The fire pit inside had no chimney, and I imagined the stinging smoke when a meal was prepared. Frank showed me his bed, a woven mat on the ground that he shared with two younger brothers. Tiny chicks wandered about, inside and out, but the adult chickens kept their distance. I soon found out why.

I gave Frank and his parents the gifts I had brought: Food staples, clothing, soap, shoes, school supplies and a football (soccer ball). Frank, who had told me in letters his favourite game is football, showed me his old ball, a piece of foam tied in string. 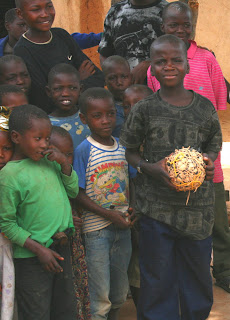 Then Emannuel said that Frank and his family had some gifts for me. First was a water gourd and cup, decorated with my name. Then a carved wooden spoon. And, to my amazement, a beautiful wax-dyed kitengi, a two piece cloth with designs in red, orange and black. How could they afford this? And then Emmanuel announced that Frank's Baba (father) had a gift to show how much he valued our coming so far to visit Frank. I heard a commotion behind me, and Frank's oldest brother cornered and caught one of the chickens grazing and clucking in the compound. A screeching, flapping gift of enraged feathers and beak was put in my arms. And pecked a chunk out of my hand.

Emmanuel explained that the gift of a chicken was an extreme honour, representing a large part of the family's posessions. "I cannot take it" I whispered, "It is too much!"

"You cannot refuse it, it would dishonour Baba and Mama."

"But I cannot take it home to Canada."

"Don't worry, we will take it back to Dodoma, we can sell it and use the money to help Frank's family."

That fiesty gift escaped her leg ties twice in the truck, flapping and squawking her displeasure. If attitude adds flavour she will be one tasty, though skinny meal. 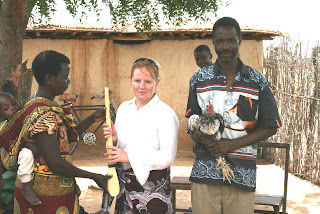 It was hard to say goodbye to Frank. In only a few hours he stole my heart with his quiet smiles. I will forever treasure the memory of him grinning and gripping my hand to take me down the path to his home.

When B and I had hugged Frank goodbye and climbed back into the truck, I looked over at B who had taken off his glasses and was wiping his eyes. I have rarely seen B cry. "Hard to let the little guy go," he choked out. Yes, it was.

For a few hours, two families from very different worlds shared laughter, learning, and love. We exchanged gifts. Our gifts to them were barely a token of the abundance in our life. Frank's gifts to us were an unbelievable honour.

It was a perfect day.

So... obviously you remembered the language from your teenage years? Or are you just a great repeater of phrases?

Not that the language overshadowed the lovely experience you had. How is T making out on this trip? Did she join you at Frank's?

your visit to Frank sounds amazing .we are in the process of arranging a visit to a little girl called grace ,that we have sponsored for three years ,we are also flying into Dodoma ,and the following day we have a 5 hour drive to Kirisiri,after reading your report of a wonderful day i can hardly wait until christmas now.
we look forward to reading more about your journey

Thanks for your kind comments.
Teri's cousin, I am just a good repeater of phrases, a parrot really!

rkaty, I WOULD LOVE TO EXCHANGE E-MAILS WITH YOU about your visit to your sponsored child. I Have not yet put an e-mail link on this blog site yet, but I will soon.
V.

Thanks for your post. It brings up many fond Dodoma memories. I have spent a lot of time in Dodoma over the course of the past decade. The people of Dodoma are wonderful people. I've had many "precious gifts" from Dodoma that I am looking at in my office as I write this. I'm like B also, seldom shed any tears; but have been known to wipe a few away in Dodoma.