I've been given a dummy award! And I am delighted. Thanks Dumdad. I always enjoy a trip over to Dumdad's posts from Paris.

Dumdad's tribute was a nice surprise upon arrival home from a long weekend away. We took advantage of a brief break in the November rains to head up to the cabin and hike in the mountains. We chose the Mount Slesse area, and gave our city slicker SUV a lesson in real four wheelin' to reach the trail head up a labyrinth of logging roads.

It was lovely. There was a dusting of new snow on the peaks. 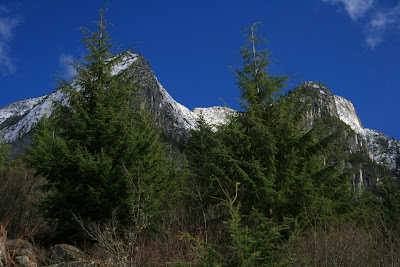 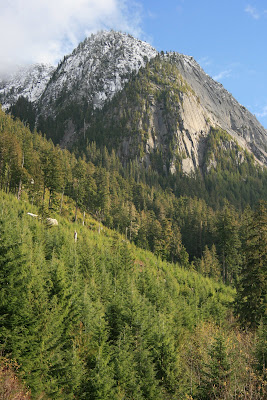 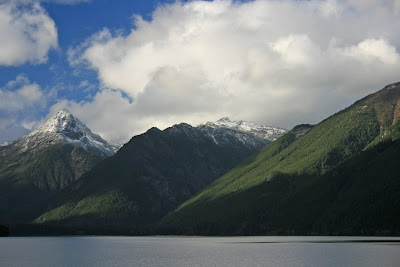 The dogs were in heaven, chasing scents and each other down the trail. We hiked in peaceful silence, perhaps feeling a bit eerie knowing that in 1956 a Trans Canada Airline plane crashed into the side of Mount Slesse, killing all on board. 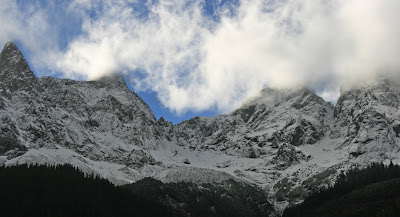 Then: Bang! Bang! Bang! Oh shit. Hunting season. Nothing ruins a good hike like the thought of stray bullets from beer guzzling, animal murdering red necks. "Fucking hunters" I mumbled to B. " Hey!!!" I shouted. "Don't shoot this way!!

Around the next corner ran a young man dressed completely in camouflage, carrying a rifle. "Hi" he said. "Are you guys O.K.? I thought I heard an S.O.S blast on an air horn, so I fired three rounds in the air in answer, and I was heading that way to help." We had heard the air horn too, but knew it was just a choker chain warning from a small logging operation we had seen down the mountain. We explained, and with a cheerful "Have a great hike guys!" helpful hunter dude went on his way. Damn, another cherished stereotype ruined.

It was a great hike.

Today's dream travel destination: One of my favourite hikes, that I did with an old friend about 10 years ago. A warmer one than any trails here right now. The Kalalau trail in Kauai, Hawaii. 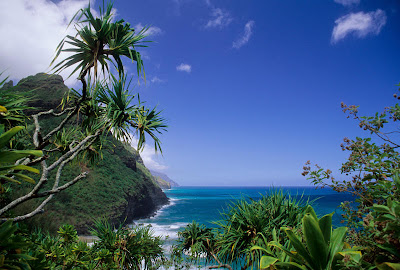 So, I just posted a brilliant comment here,and it all went away. WTF? Anyway, dear one, I mainly told you what a brilliant blogger you are; funny, thoughtful, irreverent, delicately profane, and all the elements that make you a cherished sort of person.
All that and the Kalalau Trail. OK, let's go. Bonus (aside from dozens of others), no hunters, except maybe the odd pig shooter.
And, 'Fucking Stripe'. Thank you for that. Of course, the good point about that is that it's situated in Ottawa, a place where no sensible person goes willingly.

Beautiful pictures and what a great hike to go on this time of year with the light dusting of snow to capture with your camera. I had to laugh at the cherished stereotype ruined. I've had that happen more than once. Take care, Carver

I hate hunting season. I'd hate it much more if I were hiking with dogs.

Ian, Another feature of the Kalalau trail is naked hikers. I kid you not. Apparently when it rains on the hot, steamy hike, many folks figure the best rain suit is bare skin.

Carver, It's always disconcerting to have to let go of preconcieved ideas about people.

Jazz, Yes, walking with two critters the size of small deers in hunting season is kind of crazy.

Your hiking options are a bit more spectacular than mine! What beautiful country.

I'm with you on the hunters, right down to the verbal response. We have one less as of a few days ago: somebody near here mistook his buddy for a deer and shot him. The guy bled to death before his eagle-eyed friend managed to drag him out of the woods. Yeah, I can see that happening... an adult human bears such a close resemblance to a deer with antlers.

Hang on to that stereotype.

Glad you had a good hike.

Now I want to go there! So many places, so little time.

But the call of the wild still has to be answered, doesn't it?

Yet another one to add to the wish list.

Why lust after the tropics when your affection for the natural beauty around where you live is so obvious?

wizened wizard, From your photographs I'd say there is lots of gorgeous scenery around you. But I have to admit, the mountains here are very camera freindly.

Riseout of me, Most of the time in November, the view here is also obscured by rain, mist, and clouds. So the odd dry day is especially enticing.

Ninja, I do love it here. But the cold November rain makes tropical trails really alluring.

What beautiful photos Voyager. It sure is lovely around that area.
I love the story of the hunter in camouflage, for heavens sake. All's well that ends well.

jmb, It is beautiful up the Fraser Valley isn't it? We are so lucky to live in the mountains.
V.

This is the time of year I do my runs wearing blaze orange!

Your photos always insprie me and make me go troll travelocity...

Such beautiful scenery! Rural BC is definitely high on my list of places to visit.

So glad you're safe! The pictures are beautiful. And I agree, I would LOVE to be in Hawaii right now!

Alda, come any time, I'd love to show you some of my favourite wilderness places.

Angela, Anywhere hot and sunny would be great right now.

The destruction of cherished stereotypes . . .Funny! The hunter probably had a stereotypical view of the #$@@% who walk in the woods durring hunting season, too. :>)

Really beautiful pictures... now where did I put my hiking boots and my backpack???

Big Brother, I thought you always kept your hiking boots and pack at hand, ready to go.

The hunters are out here in droves. Charles can't go running on the trails because of the risk. We have to keep Molly-dog near the house for the same reason.

DOn't you hate it when someone you are all set to look down on and dislike goes and acts all nice? Jeez.

Looks beautiful, by the way.

I feel exactly as you do about hunters, even though I know that there are one or two nice guys out there who hunt.

Your photographs are gorgeous! It sounds like a wonderful holiday spent doing something you really wanted to do, which we should all try for more often.

Diana, Keep your husband and Molly dog close to home until it's all over.

CS, Yes, and he was kind of hot too! Hunters in my mind are supposed to be fat, scruffy, middle aged men wearing plastic ball caps.

Heart, A couple of days hiking in the mountains (or by the sea, or wherever makes your heart soar)is a prescription I recommend to anyone.

Wow. Are you sure you didn't drive to Nepal for the weekend?!?

I had my stereotype of hunters blown to smithereens, too. A few years back I was hiking in the Colorado Rockies with a former friend who has no common sense or judgment. She insisted that it would be fine to drive our rented Dodge Neon down a 4-wheel-drive road. The road ripped something off the bottom of the Neon and we freaked!

A hunter who was camped nearby slithered under the car with his Swiss Army knife and fixed the problem. We were tremendously relieved.

It made me realize that I shouldn't be so quick to tar a whole group of people with the same brush.

Hi
I just came across to your blog and reading this story.It is very interesting story Given the nature of flight, there is a greater likelihood of death when in a plane crash than in an automobile crash. Because car crashes are more frequent, and impact people we know, most Americans realize that negligent drivers who injure or kill someone will be held liable. Given the nature of airplane crashes, most American don't realize with the same certainty that negligence shown by airline carriers also will be held liable.Flying in small airplanes often carries a greater risk than flying in large aircraft, though accidents can occur with either. Sometimes airplane crashes happen low to the ground and can be relatively minor, while high speed crashes or crashes at high altitude may result in serious injury or death. A crash can be emotionally and physically devastating for passengers and crew alike.accident injury claims.Thanks a lot for sharing this story.