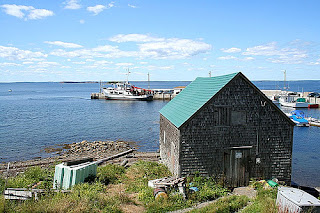 One day on vacation last week, we were headed by ferry and bicycles for a day trip to Tancook Island. It lies about an hour's boat ride from Chester, and a million miles from the well visited coves that dot the tourist routes of Nova Scotia.

"How many people live on Tancook?" I asked the ferry captain.

When we arrived at "big" Tancook, it seemed most of the hunnert-tirty residents were there to meet passengers or pick up stuff unloaded by the big red crane on the ferry. 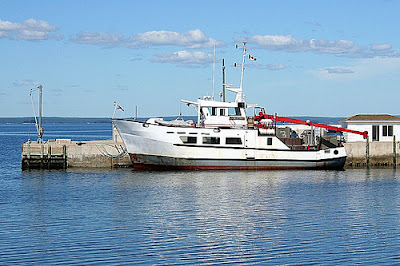 There is no store, gas station, or any business other than a small cafe on the Island. The cars there do not have licence plates, or presumably, insurance either. 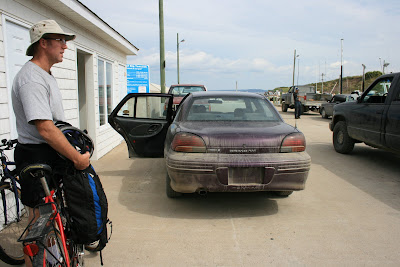 So I tightened the strap on my bike helmet before we hit the road. All ten dirt kilometres of it. I wonder how many targets there are for the owner of this souped up Tancook chick magnet? 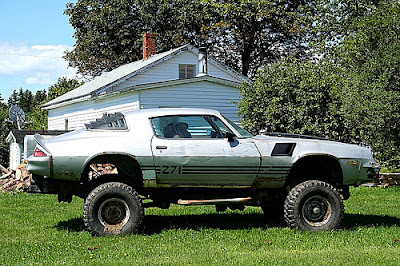 Despite the warm sunshine, Tancook Island had a chilly, eerie feel. We stopped at the top of a hill half way across the Island and explored the graveyard. The graves here date back to the late 1700's. There are dozens of sad little headstones from a smallpox outbreak in the 1870's. One family lost twelve children. 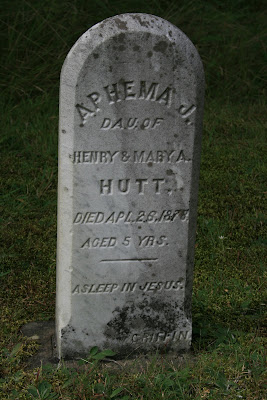 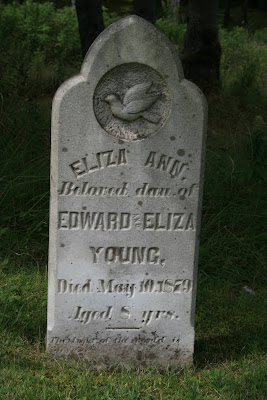 Walking through the whole graveyard, we counted only 7 different surnames on over 200 years of headstones. I began to hear echoes of duelling banjos (or maritime fiddles?)

Near the end of the road we rounded a bend and came across a black and white cat lying near a small red building. He stretched, sauntered over to us for a rub, and walked into the single room red shed. Then we saw the little sign over the open door: TANCOOK ISLAND MUSEUM. We followed him inside. Someone has collected antique tools, photographs, furniture and household items from Tancook, and gathered them here. There was a donation box for "money for the lights". Despite the bright day, it was dark inside, and the lights were on. The cat rubbed up against our ankles as we walked around the "exhibits". 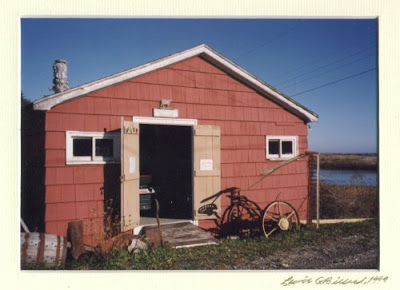 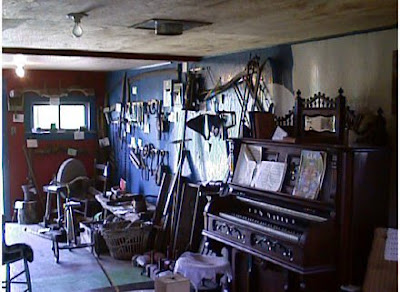 About 50 metres past the museum we stopped to greet two men painting a barn. "Hello, what is the museum cat's name?" I asked.

"The friendly black and white one, hanging around the museum just up the road," I explained.

They looked at each other, shrugged, and one answered, "I daown't naow any cat up theyah".

When we rode past the museum on our return to the ferry later, after our picnic lunch, we stopped and looked for our feline tour guide, but he (she?) had dissappeared.

It was a ghost kitty, I'm sure of it. Perhaps the beloved pet of one of the young children in the graveyard. Guarding the child's treasures now on display in the museum. A very fat, well fed ghost, I'll admit. But still. 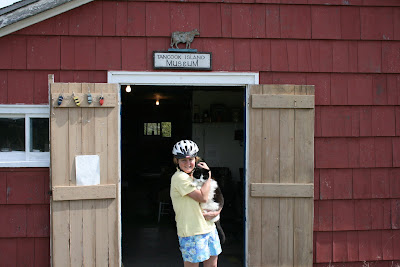 This sounds like such a cool place to visit. And your photos are great. Thanks for sharing!

Damn girl, have you got it into your head to FORCE me to go back there?

Ghosts like that give haunts a good name. So sad about all the deaths from the small pox. I can't even begin to imagine.

em, It is a cool place. Canada is a huge and diverse country, and I forget sometimes that there are corners of it that are a whole different, wonderful world from mine.

jazz, Wait 'til I post the pics of Cape Breton!

Diana, Kitty phantoms are the best. If ghosts exist. I would like to believe....

Voyager, are you the first person to photograph a ghost kitty?

Lovely photos of an area seldom visited I'm sure. Imagine losing all your children like that so suddenly.
regards
jmb

Fascinating. And spooky but in a nice way.

This was so good, dear friend. What a fascinating place and your explorations so live up to the 'Voyager' aspect of you. It reminds me in some respects of Fort Klamath OR, where we just stayed for a few nights. I liked this, and thanks for sharing it.

You can never go wrong exploring off the tourist track. I do this as often as possible along the Inside Passage and Sunshine Coast. The less promising a place looks, the better it usually turns out to be.

Beautiful photo journalism. Sounds like a great trip, and clearly a beautiful place to visit. Loved the grave yard observations. :>) You are a sharp observer and quick with the wit.

jmb, I may be the first person to photograph a ghost cat. I should call the national enquirer.

dumdad, You're right, it was a bit spooky. But not in an unfriendly way.

Ian, Thanks, I've enjoyed your vacation stories over the last few posts. Crater Lake looks so gorgeously blue. Early September is a great time to go awasy isn't it? Things are quieter, and the weather is cooler.

ninja, Like you, I love to explore unusual (and often unplanned) places. You never know what you will find. Like a ghost kitty museum guard.

Ruth, thank you. High praise from a teacher! I love exploring old graveyards, they are so full of stories.

Beautiful place, sometimes places that are far off the tourist trails are the best. By the way that museum looks a bit like my garage, maybe I should get a cat and open a museum also...;o)

What an interesting dialect/accent the people seem to have.

I remember thinking that Nova Scotians sounded vaguely Scottish when I was there, but that may have been wishful thinking (my Scottish ancestors settled in Nova Scotia and New Brunswick before migrating further south to the U.S.).

Your dialogue of the local accent so very well portrays the place. Then you add in the pictures and your descriptions, and I am rightfully charmed. Well done!

But losing twelve kids. It does make one think the nature of familial love and attachment between parents and children HAD to be different in such hard times. We have such luxurious, secure love for our kids nowadays, planning out their futures when before we might not have.

David, welcome from Portugal, glad you dropped by. Hope to see you here again.

Rozanne, Rural Nova Scotians have a unique accent, and delightful expressions. It does sound a bit Scottish.

jocelyn, I wonder, like you do, how strange and heartbreaking it would be to live in a time when the death of one, or even all, of one's children is not uncommon.

What marvelous photographs. The cat picture at the end is, quite simply, the best ever. I agree with you and the others. Just thinking about losing a child is enough to break me. I don't know what I'd do if I ever actually lost one, and I hope to God I never find out. I can't think of many worse hells than that.

Angela, I can't even imagine the pain.

I just found this website - I'm a Tancooker but one that is from away (not born on the island).

It is a wonderful island and we hope all the poeple who have visited this website will come for a visit.

The original islanders still carry a Tancook Island accent - and they love to tell you their stories - stop and say hello.

Hope to see you all in the summer. Bring your lunch and picnic on the South East Cove Beach - the water is very warm at low tide. Popplerock gifts and collectables is open July 1st (Backalong Road - turn left as you walk up the hill from the wharf).