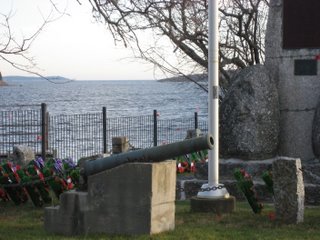 At the end of my business trip to PEI last week, I stopped in Nova Scotia, to visit my parents in Chester. They have lived in this little jewel of a village on the Atlantic for more than 25 years.

On this visit, I was there for Remembrance Day, Nov. 11. It was a glorious day, with unseasonably warm sun twinkling off the ripples in the harbour. I walked to the village cenotaph, which shares a tiny park by the shore with the bandstand gazebo. It seemed that most of the town, and all of its dogs, had come to share the annual memorial ceremony at 11:00 am.

When the kilted piper played the ritual Lament, the profound stillness and unexpectedly plentiful tears in the crowd moved me deeply. Even in this little village, far from the flashy, dignitary-stuffed ceremony in Ottawa, war is all too real. The first wreath was laid by a local mother who recently lost her son in Afghanistan. The minister of my parent’s church, who led us in prayer, will be deployed to Afghanistan shortly as an army chaplain from the Reserves. November 11th is no longer just about our grandparents. We again are sending our young men and women overseas to die in a brutal war. (Do not get me started, not today.)

The Chester marching band made up in enthusiasm what they lacked in precision as they led a parade of veterans, sea cadets, volunteer firefighters, scouts, girl guides, and the Legion-sponsored peewee hockey team through town to a church service. That concluded the somber, or rather sober, part of the day’s rituals.

The local Legion was the hub for the rest of Remembrance Day. This is one of two days a year the Legion welcomes non-members. The women's auxilliary put on a buffet spread. My father's choir provided the entertainment, an afternoon performing sing-along war tunes. "It's a Long Way to Tipperary", "Pack Up Your Troubles", "White Cliffs of Dover", "You'll Get Used To It". I sang along. I know the words to these songs, but where and when did I learn them? The audience singing got louder with each $2.50 glass of Keith's. All the seats were taken, so I stood at the back near the bar. An elderly man with a row of medals on his navy blazer shuffled up.

"How are you then Jimmy?" asked the woman tending bar.

His grin was all the answer needed. 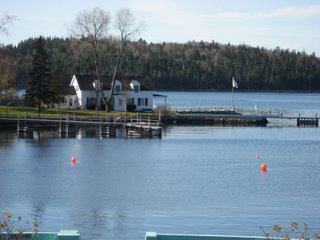