Before B and I bought this money-sucking pile of bricks and cedar, I lived in a hip, pretentious neighbourhood near downtown, full of young professionals, a sprinkling of retirees, and chic gay couples. Not many children. My son’s elementary school was the smallest in the district, with less than 200 kids. (Unfortunately that’s not the explanation for why every successive principal there knew me on a first name basis.) We got a few trick or treaters on our street, but only because an NHL hockey player lived on the next block. Halloween in the area went unnoticed. Well, almost. The waiter at the sushi restaurant up the street put on a costume.

But our current neighbourhood does Halloween, and I love it! Yards are elaborately decorated with dead and dying souls, goulish lights, even sound effects. Check it out: 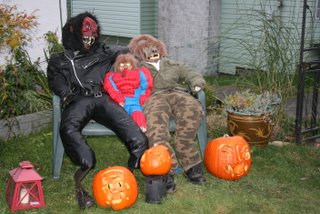 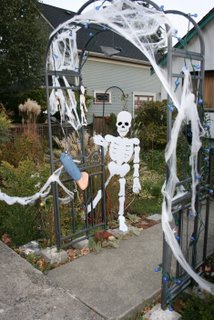 Yesterday evening started with the tiny adorable bumble bees and bunnies in their Daddy’s arms, who were far more interested in our dog Henry than candy. “Goggie! Goggie!” (Tika, who pees in fright at the sound of a firecracker was shut up in the basement.) Then we got so many princesses, Sponge Bobs, vampires and witches I had to raid B’s chocolate bar stash. Almost last came the young teens with ‘tude and cell phones. And finally, an hour after the last of them, the doorbell rang again. By then it was my bed time, and I crankily went to the door.

On the porch are two guys about 17 years old. No costumes. Grinning hugely. “Trick or treat!” Should I offer them a chocolate bar, or a beer? Sarcastically I ask: “So what are you?” They immediately drop to their knees. “We’re midgets!” Now they are laughing out loud, madly pleased with their scam. I try not to smile. Then one of them stares at the plastic skeleton we have hung by the front door. “Whoa, dude!” he says, taking its boney hand, “You should have been nicer to the lady.”

Dudes, you made my night.
Posted by Voyager at 6:32 PM

Email ThisBlogThis!Share to TwitterShare to FacebookShare to Pinterest
Labels: Halloween