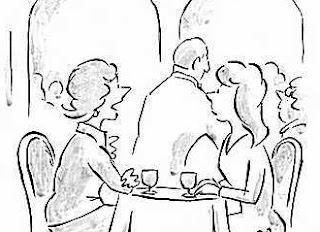 I had lunch recently with an old friend from university days. She embarked on a deliciously gossipy tale of a mutual acquaintance of ours who works in her company. A few months ago he began a liaison with a coworker. The fellow and his coworker were frequently away on business trips at the same time, and rumours swirled. But the whole thing came to a head, so to speak, when the secretary of one phoned her boss's hotel very early one morning and the other answered, rather breathless. Busted. The wife found out, the marital shit hit the fan, and they are now choking through the first course at the divorce buffet.

What, you think I shouldn't indulge in this sort of gossip? That my lunch time would be better spent at the latest art gallery exhibit? Screw that! I was riveted, salivating for every detail. Best lunch date I've had in ages.

But I also found it unsettling. Usually when I hear tales of philandering acquaintances I think, "Well that doesn't surprise me." I can usually predict the skirt (and trouser) chasers. But this one surprised me.

I found myself pondering what makes a man risk everything he used to cherish (and maybe still does) to go after an illicit sexual dalliance. If dangerous adventure is the lure, why not go trekking in Afghanistan? Or join a nudist ice hockey club?

I can't ask my husband this question, because any husband with an ounce of sense who values his testicles will reply with the SC (spousally correct) answer. "Sweetheart, I'd never dream of it. Even if Angelina Jolie suddenly appeared naked in my bed. No, I mean, I wasn't thinking of Angie or anything, it's just an example." Blah Blah foot-in-the-mouth blah.

So I asked a male, married, dear old friend of mine for an honest answer. We are the same age. On the wrong side of 49.

"You know," he said, "There was a time when I would have been very tempted. Actually was tempted. In fact went a little further than tempted. But now, at my age, it would be like a dog chasing a bus. What the hell would I do with it if I actually caught it? The whole idea just makes me want to take a nap."

Great. I've reached the age where inertia will keep my man from straying. Note to self: Cancel that plastic surgery consultation. But wait, my man is five years younger than I am. He may have the odd bus chase in him yet. Excuse me while I go out to buy a sexy neglige. I'm going to do whatever I can to make sure I'm that bus. 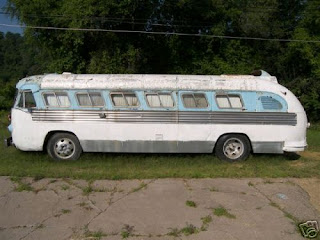 Email ThisBlogThis!Share to TwitterShare to FacebookShare to Pinterest
Labels: age

Oh, V. Look at those pictures of yourself and know that you are the bus he and likely several others will be chasing for ages and ages.

Spend your time in worthwhile gossip rather than in the plastic surgeon's waiting room.

I always figure stuff like that deserves to be the center of gossip.

Finally, both my husband and I look at each other and say, "How the hell does anyone have the time or energy to do so, if they had the inclination to carry on with an affair???" We then curl up together and take a nap.

There's a lot to be said for compatibility.

If your man were to leave you, then it should be to get a brain transplant, that's what I think.
Meanwhile, I agree with your male friend on the wrong side of 49, as am I too. OK, my dear, time to fess up. Once, many years ago, I did the same thing. I emphasize "many years ago" because this time around I'm exquisitely happily married and resolutely faithful. And, I think it was that incident that, in effect, made me mend my ways and vow to never ever again do that to another person. It's a truly shitty thing to do. Anyway, we recovered temporarily back then, but I think it did irreparable damage to the marriage. Oh, there were many other problems, which was one of my excuses for the philandering, but nothing to justify the betrayal. Yadda-yadda.
Oh, and I am sure you don't need a sexy negligee to keep your household ticking along smoothly. Just an instinct.
Cheers,
Ian

I think if you're in a fulfilling relationship, that sort of thing doesn't happen - unless the man has a particular weakness for philandering, that is.

Call me naive, but there it is.

OTOH, if a relationship is falling apart, it often takes a new relationship for men to have the courage to leave.

An old bus, nah more like a Porche. ;o) I don't know why we have such self destructive behaviours but to paraphrase a cliché, "It ain't for nothing that the grass is greener on the other side of the fence, it's because of all the manure that is waiting for you!"

diana, To be honest, even though I was pondering generally, I have no worries about B. And vice versa I'm sure.

ian, It sounds like a lesson learned the hard way. But learned from, and that's what matters. And I can tell by how you write about your spouse you are devoted to her. Lucky woman.

Alda, I think you are right. But there are those who have a definite weakness for for philandering. I can ususally spot them a mile away. This one I never suspected.

BB, I love that expression. The manure on the other side. Gotta remember that one.

Hi voyager,
a very interesting post. I think it just goes to show that any man or woman is capable of temptation. What makes one act and another resist need not be all that clear.
Don't ever be complacent, make sure that all is well on the home front and it probably will never happen.
Go treat yourself to that sexy negligée.
regards
jmb

Love the manure quip ... never thought about WHY the grass is greener ...

Also, why would anyone go out for takeaway when theres steak (or prawns or vegetarian delights)being served at home?

Hell, I'm not on the wrong side of 49 yet and the very idea of straying tires me out. I have finite amounts of energy and using them to get laid when I can get as much of that as I want already... Meh, not so much.

Many middle-aged men believe themselves to be sleek greyhounds chasing a red Ferrari when, in fact, they are paunchy mongrels with distemper limping after a bus.
But hope springs eternal...

What many wronged spouses don't realize is that it is usually not any lack in them that causes their mate to stray. It's either in someone's makeup or not.

But it's a very rotten way to wound someone because it is invariably taken as a statement of their inadequacy.

My husband is younger than I, too, but I don't worry about it because he's one of the good guys, like yours.

You've been tagged by me, so please drive on over in that awesome bus for details.

jmb,to be honest, I have never bought a sexy neglige. I wouldn't know where to start. But I think I will look for one, could be fun!

Riseoutofme, true, and takeaway is so much more expensive than home cooked delights.

Jazz, I love your take on the joy of married life: getting laid whenever you want.

dumdad, your mongrel analogy is hilarious!

Heart, Thanks for the kind words and the tag. I'll have to ponder this for a bit, talking about what I like about myself is an uncomfortable exercise.

The need to philander reflects strongly on the philanderer...and, sadly, the one being cheated on takes it personally. But it's the one doing the cheating who needs some different version of him/herself.

And such. Anyhow, I wish I'd been at that lunch with you.

Meh. Skip the negligee if it's not your still. I've heard over and over that there's nothing sexier than a woman who's comfortable with herself.

(I'd totally be into the gossip, too.)

I'v ebeen a therapist long enough to be able to tell you that you'd be flat amazed at who is unfaitful. Male, female, young, old, conservative, liberal. I've given being surprised. Probably the one commonality is something lacking in the marriage (not blaming the cheated on person, just saying that when people are truly happy together, no one cheats).

Now this time I'm going to bookmark your blog. Love it. As for the philandering . . .you have so many comments, I'll skip that and just say I share your lust for the gossip. :>) That's what lunch dates are for. And anybody that thinks that's awful to say . . .well, compare gossip to philandering. You have to have some weakness.