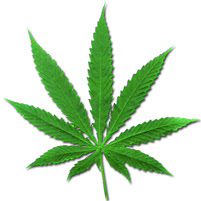 "What's up?" replies my son L, who was nearby in the kitchen.

Acting on a tip, police in [area of Vancouver] found a 360 plant marijuana grow operation Tuesday. It was in the basement of a home in the [xxxx] block of [xxxx] Avenue.

"Actually, it's only four houses down. B and I saw all the police cars there Tuesday night, now I know why" I said.

L is quiet for a minute. "Hey Mom, remember that time last year when you came home early and said you smelled marijuana? And you blamed me and my friend Joe?"

I lower the paper and look at L with one eyebrow raised. I know where this is going. I'm sure you do too.

"Well, it must have been the people down the street."

"I smelled smoked marijuana, not the plant."

"Yah, but if they were growing it they must have been smoking it too."

"What, they broke into our house and went into your room to light up a fat one? And I suppose they must be the ones who once planted a pot plant in with my tomatoes?"

L grins at me. With the special, eyes sparkling, cheek dimpled smile he's had since babyhood. The one that makes me want to smother him with kisses, even when he has broken a vase. Or crunched the bumper of my car. Or committed an indictable offence.

Today's dream travel destination: Amsterdam, where my plant-loving neighbours would not have been busted, they would be pillars of the business community. 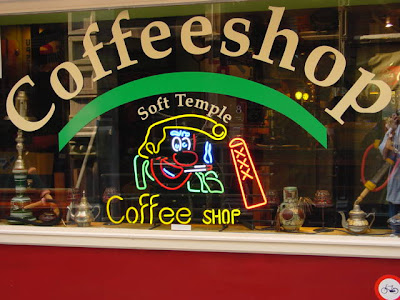 Well you can't blame a guy for trying... as long as he doesn't usurp the whole tomato garden for his botanical experimentation. ;o)

bb, That's what he claimed at the time: "Mom, don't worry, it's just a science experiment."
V.

Marvelous! Having grown up in Humboldt County (where the primary source of income and outgo is weed), I'm sure that at least half the county was growing plants, usually by the dozens. It was a rather relaxed place to grow up and probably accounts for my "lack of drive" today. (Not the pot smoking, just general attitude.) I love your description of your son. I could see it perfectly. Imps, all of them. ;)

Now if he had any sense he would not have brought this up, but then you wouldn't have remembered and entertained us with this story.
We had a grow-up across the road from us for six months and we never knew it until it was busted one night.
regards
jmb

"Science experiment." I like that. Wish I'd thought of that when I was a teenager....

Well,dear, I buy it. I mean, I have absolutely no doubt it was just as he said it was. Then again, I beliece, I really do believe that pigs can fly if they really put their minds to it. Once (for a newspaper series I was writing) I got to accompany the cops when they busted a grow-op. Took a long time to get the smell out of my clothes.

Kid doesn't miss a trick, does he?

jmb, BC bud is big busines, isn't it? Amazing that grow ops abound in our ordinary middle class neighbourhoods.

Dumdad, Your parents wouldn't have bought the science experiment story any more than I did.

Ian, was that a pig I just saw flying past my window?

Diana, no he doesn't. And he's too old to spank.

Look at it this way, he could've planted 350 of them in your basement. One in the tomatoes is much better. Besides, I'm sure a tomato, weed and bocconcini salad would be great.

What a minute! You let your son say "shit" in front of you?

He certainly could have gotten into some pretty deep shit with that, but neither the police [or my parents!!!] ever knew about it.

So did you know the stoners down the street?

Also, better to have pot farmers in your neighborhood than a meth house.

Jazz, that would be an interesting salad indeed.

rozanne, my son says worse things than "shit" at home! Swearing does not bother me, I've got a mouth like a biker chick myself sometimes. The rule around here is backwards, you can swear at home or when you are with people you know are not offended. But never in front of strangers or people you know don't like it.

Hi, Voyager ... long-time listener, first-time caller from just south of you (Bremerton, Washington, though I was born in Nanaimo and hold dual citizenship).

Practice reverse psychology on your son ... say "I forbid you not to smoke pot." Then he'll of course go do the forbidden thing, and not smoke any. It'll be pure evil genius!

I imagine the pot problem must be more prevalent in Vancouver, which is probably the most liberal city in Canada (given its permissible attitudes towards pot, homosexuality and prostitution). I wonder how much of the appeal of it would simply vanish if they just lightened up and legalized growing, selling and smoking ... but taxed and regulated the hell out of it.

And as far as swearing goes, encourage your kids to use made-up swear words ... any idiot can say "shit" or "fuck." My personal favorites are "fuckweed," "shit-tastic," "jackspanker" and "mother pusbucket." Encourage their creativity!