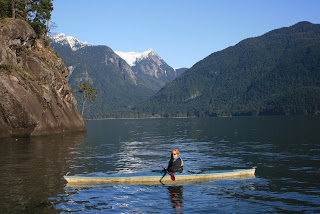 "I'm going out in the Kayak," I informed B on Saturday morning. "I'll just be an hour or two."

It was a glorious spring day. I decided to paddle up the lake to Seal Bay, about two kilometers away. 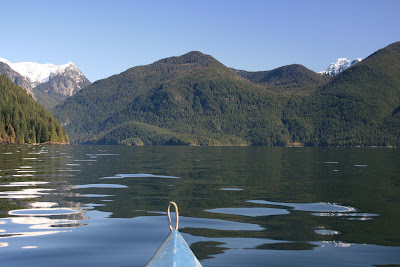 It was silent but for the drip of my paddle, and the little rivulets of melt water cascading from the rocks, onto me (and the camera lens)when I went in to explore a little cove. 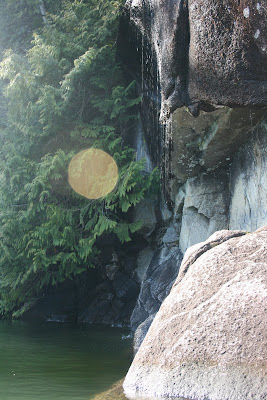 I got to Seal Bay, and decided to continue further north, by then mesmerized by the rhythm of paddling, and the sun on my shoulders. Our weathered old kayak, which we bought from a friend for a case of beer, is fast and sleek. She whispers through the water. I decided to head for the Indian pictographs, painted by ancestors of the Katzie First Nation. 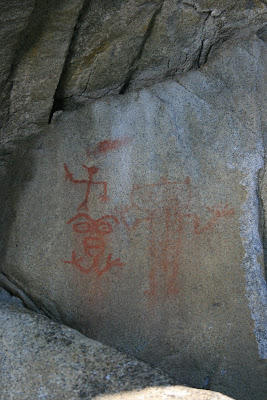 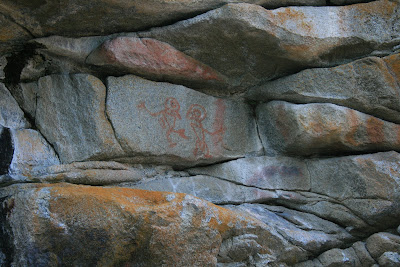 When I had been gone longer than expected, my pit crew showed up with lunch. I was happy to see them, and hungry, but I enjoyed my solitude again after they went back to the cabin. I paddled on. 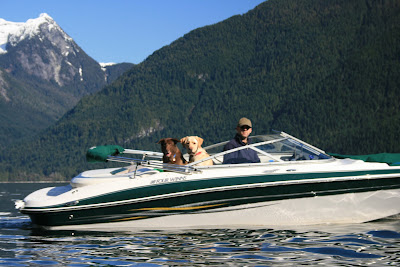 Eventually, as the sun dropped closer to the mountain tops, I turned for home. As I paddled into our bay, the snow on Golden Ears Mountain gleamed, and the afternoon light sparkled on the lake. 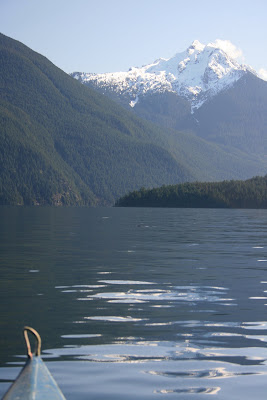 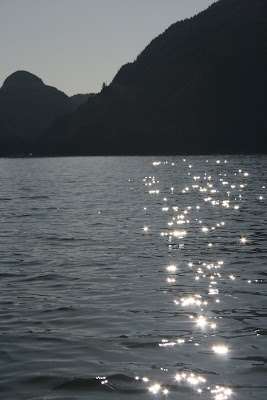 Oh yes there are perfect days like that. Days where you say to yourself that it just can't get any better than this. Beautiful pictures, love the mountains and the water.

Wow. The dogs. I want pics of the dogs please. Who are they? Would they accept to be posted in closeup on your blog? Or would they resent it terribly?

Looks so serene. What a lovely day.

Big Brother, you have posted photos of skiing that remind of this kind of day.

Jazz, the dogs, 12 year old Tika and 4 year old Henry are in my "About Me" photo on the right hand side bar of my blog. I have written about them here:
http://spindriftanddreams.blogspot.com/2006/11/reigning-cats-and-dogs-part-1-henry.html

They are old posts though, perhaps it's time to dust off the dogs for another feature appearance.

SAW, yes, it was so serene. We all need days of solitude and beauty now and then.

What a wonderful photo essay of your day on the water. Great words too. Those are the best kind of days and so great that your crew brought you lunch.

Lady Fi, I am lucky indeed to live in such a beautiful part of the world. There are so many wonderful places though, as your photos often prove.

Lee, thank you, and welcome to this corner of the blogosphere.

Carver, your comment and my last one crossed in the mail, so to speak. Yes, my pit crew is great, although I did not mention in my post that the "lunch" they brought me was an apple, an orange, and a beer.
V.

My goodness, what a breathtaking place to live, it is absolutely glorious - wow! The pooches are adorable, do they swim too?

First reaction here is shock that any place in North America looks like this right now--so gorgeous. Second reaction is envy. I want to be you.

That was a heavenly trip, my darlin'. What exquisite scenery. I would like to be there right now. Oh, and I commend your energy. I have a tiny lower back problem so kayaking is uncomfortable for me. Canoeing works better because I can sit higher.

Shrinky: Hi, and welcome. Yes the pooches love the lake, although the old brown bitch Tika rarely ventures in except on the hottest days. Young blonde Henry swims all year round, but he is not very bright, bless him. As you can see, snow and ice melt directly into the lake. It never warms up much before July.

Hi Jocelyn, if it makes you feel better, I had to trudge through slush to walk the dogs this morning. Mother can be a whore.

Mr Writeon, you really have to get back to Pitt Lake again some time. The offers (I've made several, I recall,) are always open.

Anonymous: I know you will never read this, but get my blog, creep!!

(Does anyone know how to delete an unwanted comment? I don't want to turn on word verification if I can help it.)

OH MY GOD!! MOM, I MADE A MISTAKE! In reply to Jocelyn I meant to say "Mother Nature can be a whore."

Shit, I'm out of the will now.

Genial post and this mail helped me alot in my college assignement. Thanks you as your information.

The question is removed