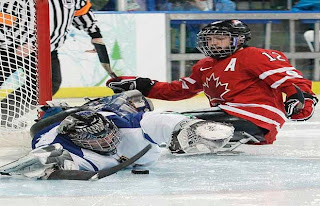 At ten o'clock on a Saturday morning. Oh Canada.

I was at the first sledge hockey game of the Paralympics last week. Generally, Paralympic athletes do not get the recognition they deserve. I have to admit, the Paralympics would hardly be on my radar, except that the sister of a friend of mine was an Olympian in wheelchair rugby some years ago, making me a little more aware. Now the games are here in Vancouver, and I am happy to see them generate so much excitement.

That excitement was evident at the sold out Canada versus Italy game last week. It is Hockey, after all, and this is Canada. Our red blood cells look like microscopic pucks. Our passports are the same shape as the blade of a goalie stick, and their covers are dyed to match the blue line.

At the game, the beer was flowing, the flags were waved, and the cheers were deafening. There had been no tedious security checks coming in: in fact the only hold up at the entrance was the line up at the beer taps. 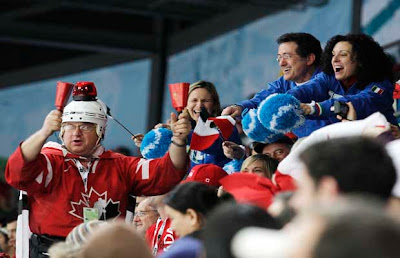 Our Prime Minister was there, looking like someone had shoved a pickle up his...um...conservative platform. His advisers forgot to tell him this was not a somber occasion. Someone should have brought Stephen a beer. Are we sure he is Canadian? 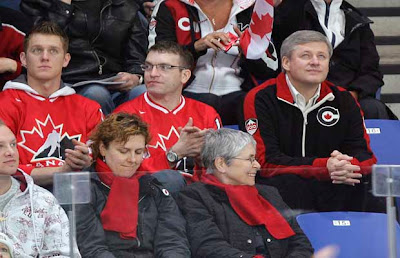 We saw the sledge hockey on TV over here... just amazing!

Up his ass, you can say it. God I hate Harper. I wonder if he has ever had fun in his life.

It looks like an exciting event and it is funny how sombre the P.M. looks. Too funny.

Lady Fi, the sledge hockey was indeed amazing. I know exhausting it is to propel myself all over a hockey rink on two feet, I cannot imagine doing it only with my arms. Also, sledge hockey has the added trick of players sliding the puck back and forth under their sledge to try and keep it away from the pursuers. Great fun to watch!

Jazz and Carver, I have rarely seen a photo of Harper smiling. And even then, the smile never reaches his eyes. That pickle must be very sour.

I agree, these guys do not command half the respect they deserve (but I am hugely biased, being as how my son is in training for the Special Needs Olymics)!

I have to say Canada is going to be a really hard act to follow, you guys are spectacular hosts, Lord knows how poor old London will fare after you..

I thought I'd pop back to answer your question about my daffodils. Unfortunately I planted those over 10 years ago and didn't save the name. I often wish I'd done a better job of saving names of my plants and flowers because I have trouble remembering them.

Shrinky, how exciting about your son. What sport is he training for?

S.A.W. It is cool. All except for our Prime Minister.

Carver, well, they are magnificent daffodils. I will look out for the bulbs in my garden centre.