Everything I need to know I learned from Grandpa 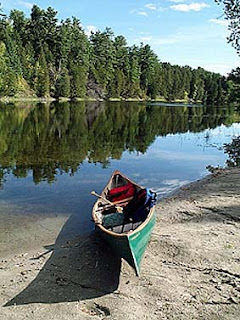 As they rounded the bend in the river, he reached forward to the little girl in the bow of the canoe, tapped her shoulder and pointed at the far bank. A flash of movement caught her eye. Then another. She grinned in delight. Four young river otters were cavorting and belly sliding down the muddy riverbank. Mama otter was watching carefully. When mama decided the strange creatures in the canoe were too close she gave a chirp and they all dove under water. 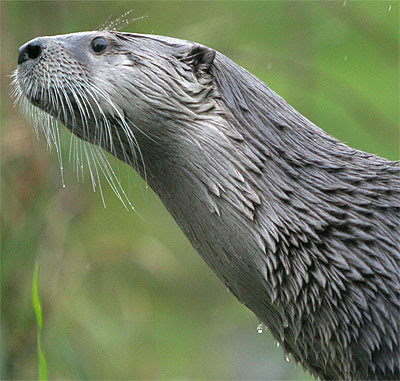 That was me with my Grandpa 42 years ago. He died 16 years ago this month, and October winds always bring him into my thoughts. He only had a grade six education, but my Grandpa Gordon taught me some of the most important lessons of my life. Like:

I learned how to bait a fish hook. Where the biggest trout hid in the Old Mill Rapids on Priest Creek. And how to clean them for the breakfast pan.

I learned the surefire way to make a camp fire with only one match.

I learned to know the sound of wolves calling in the distance at the family cottage in Quebec. And how to yip and howl through the birch bark bull horn until they would answer back.

I learned there really was magic in this world. Grandpa and I would spread special magic seeds on the lawn at bedtime, and when I woke up, lollipops (Laura Secord suckers for you Canadians) were growing everywhere.

He taught me how to drive with a standard transmission, first on my great uncle's haying tractor, then using my grandparents' Volkswagen Westfalia. I was a slow learner, but Grandpa never gave up on me, even when I almost rolled the van taking a corner too fast. He just calmly nodded and said "Now you know to take those curves a little slower Janie. Remember to gear down when you head into the curve." Every car I have owned has had a standard transmission. Thanks to my Grandpa, I love to drive feeling the road through the stick shift.

Every time I watched him run down the road to the fire hall to take up his post on the volunteer fire department, I learned the importance of giving back to one's community.

I learned that an honest day's work is something to be proud of. Grandpa swelled with pride the day he took me through the paper mill he toiled in all his working years. The paper rolls were huge, and loud as the newsprint roared around them. I was so thrilled that my Grandpa, MY OWN GRANDPA! knew how to work them. And how to fix them if they broke.

I learned never to trump my partner's ace in a game of Euchre. Or life.

As well as being a teacher of IMPORTANT LESSONS, Grandpa was my biggest fan. He believed, and never let me forget, I could do anything.

One day, not long before he died, my Mom picked him up from his nursing home and drove him to a medical appointment in Ottawa. He had been suffering with increasing dementia for several years, probably Alzheimer's, and mostly did not understand what was going on around him any more. By then, I was a new lawyer and new mother, living on the other side of the country, wrapped up in my own life. The last time I had talked to him he seemed to think I was a child again, and had no apparent understanding of my adult life.

But as they drove past the Supreme Court of Canada on Ottawa's Wellington Street my usually silent Grandpa looked towards it and announced, "Someday Janie will be there."

I'll probably never be a Supreme Court Judge. But I still turn corners quietly in a canoe, kayak or on a hike. I think Grandpa would be proud of that
too.

Email ThisBlogThis!Share to TwitterShare to FacebookShare to Pinterest
Labels: Grandpa

You were lucky to have had such a man in your life. :o) Beautiful testament to someone you love.

You write so well. Honest, frank and from the heart. I envy your ability to do this.

What a beautiful tribute to your grandfather. You write so well and I also love the photographs you included in this post. Truly beautiful.

What an amazing, amazing post. *Sigh* Thank you for sharing this with us. What a wonderful gift he was to you, and what a beautiful gift you just gave him. I started crying at the "Someday Janie will be here" line. Life. It's amazing, isn't it? Thanks, V.

What an endearing tribute, my friend. We all should have such a grandfather in our lives. My maternal grandfather was very much the same sort of man as was yours. Mine died way back in 1958 (nearly a half century ago, gasp) and I still miss him on a regular basis.

PS I loved your 'Surrey by the Sea' reference to Nanaimo. My sentiments precisely. But, I think Nanaimo actually has more Hell's Angels than Surrey. I should have mentioned that.

This is such a heart-warming post. You're lucky to have had such a wonderful grandpa; I never met mine as they were both dead before I was born.

Otters. I've always liked them ever since Tarka the Otter!

Big brother, You're right, I was very lucky. He was a beautiful man.

Highlander, I'm glad you stopped by. Thank you for the kind words.

Carver, Thank you. Except for the one of my Grandfather, the photos are not mine. I love hunting for photos to use in posts when I don't have my own. It can be a challenge finding copyright free photos, but often I am rewarded with real gems, like the river otter in this post. It was from an educational wildlife site.

Angela, He was a special gift in my life. I still get teary sometimes in October, thinking about him, but they are good tears.

Ian, I'm glad you too had such a Grandpa. Yours must have been very special for you to still miss him after all these years.

Dumdad, I don't know Tarka the otter. Is this a book?
You're right about stick shifts, dealers here are always surprised when I ask for a standard transmission. Actually I should also give some stick-shift credit to my other grandfather, who once said, "When I'm on a winding road in the mountains, I don't want some engineer in Detroit deciding when I should change gears."

This is beautiful! it deserves to be published someplace for a wider audience. I still think of my grandmother at certain times. Thank goodness for memories.

You've written a wonderful memoir of your days with your grandfather--he would be very proud of this, too:)

THIS is why I rant every so often about having never had grandparents. Anybody who considers having kids needs to consider whether or not that kid will get to have grandparents, and whether the grandparents in question will be a good thing in that kids' life. I didn't get a choice. I'm so glad you did. This post really got to me, all the way deep inside.

Lovely post voyager. How sad that he had Alzheimer's at the end of his life. Still you remember him at his finest.

Good to see you over at revolutionhealth.com. Nip it in the bud before it gets too big a number.

Ruth, thank you for the kind words.

Actonbell, I hope he would be proud. Thank you.

Ninja, I'm sorry about the way you feel, but I have to admit, I don't really understand. Grandparents can be wonderful, or not, or absent. But surely not a reason to not have children?

jmb, Alzheimer's is tragic. But it was a short time in Grandpa's life. For most of his life Grandpa was an outdoors-loving, vibrant man. It is how I remember him.

Not losing it when you took that bad curve in the road is something I think only a grandfather can pull off. Lucky girl. You snagged a good one. "Some day Janie will be there." You were loved beyond reason.

I too try to never trump my parther's ace - in life or in Euchre - well, unless some crook tries to trump it first... ,oP

I love your blog. Gorgeous photos and wonderful stories. Thanks for stopping in at my place. That's how I found you :)

Your Grandpa sounds wonderful. Today marks 4 months since my Mother died. My father had dementia in the end, like your Grandpa. Dad's been gone nearly 8 months. This post reminds me of both my parents. Thank you.

Here's to you being a Supreme Court Judge one day soon! :)

What a beautiful, beautiful tribute to a very beautiful man. You are so lucky to have had him to teach you the really important things, and to believe in you so that you could believe in yourself as well.

And his moment of lucidity passing the Supreme Courthouse was a magnificent gift.

There is no telling what could be accomplished if more women had such an intelligent, patient and loving man to help them through their growing years.

I loved reading this, Janie.

Joe, I taught my son to drive on a standard transmission. I wish I could say I had my Grandpa's patience. I bet my son does too!

echomouse, I'm so sorry about the recent loss of your parents.
As for being a Supreme Court Judge, not even on the radar. My career has taken a different focus. But knowing Grandpa believed I could, is everything.

Heart, Grandpa was the only one who ever called me Janie. I love that name.

I never really got to know any of my grandparents. A real loss.

I love your Granpa.

Now you make me think of my own grandpa. He was often an unpatient person around adults but around his granddaughters, he was a different person. I miss him terribly.

Great post!! I am sure he would be proud!

Beautiful photos and a lovely tribute to your grandad.

Rozanne, Grandparents are a special gift. I'm so lucky to have mine around when I was a child.

Diana, He must have has a specail place in your heart if you still miss him. Lucky you.

Riseout of me, It would be wonderful indeed if every kid had a grandpa like that.

What a lovely story. Thank you.

Beautiful. Have you seen the children's book "Grandad's Prayers of the Earth" by DOuglas Wood? I bet you'd really like it.

Alda, he was a lovely man.