If you have followed the story of my 2006 Christmas day so far, I congratulate you on your perseverance or excess hours of nothing better to do. Either is to be envied. For those with a normal attention span and a real job, a recap: After a night wondering whether we would wake up (or not wake up, to be accurate) as lion kibble or charred toast, and a morning doing the breast stroke across the Serengeti plain, the story left off with us eating heartily and singing "Santa Clause is Coming" to a bemused audience of starched and pressed expensive safari suits.

Giddy with the roller coaster ride that was our Christmas so far, we headed out on the road again, ready for anything. Our safari outfitter, busy on the phone back in Arusha, had finally found a lodge that could take us in, but it was out of the park, a long drive away on flooded tracks. 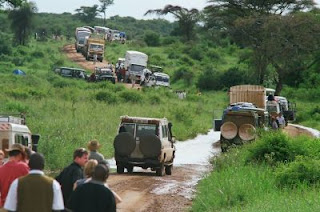 We crossed the first two rivers with no problems. Then, at the Seronera River, the evil Ho gods struck again. A line of vehicles snaked up the road on either side of the bridge. Or where a bridge would have been if it was not covered by swirling rapids and a waterfall.

Here is our guide Wellking and our worried camp staff as they seriously studied the flooded bridge situation. 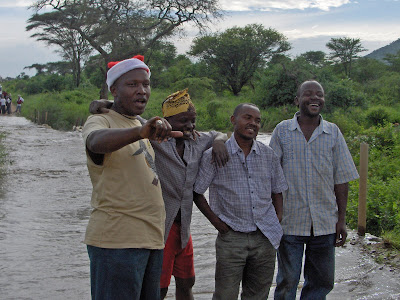 Actually, no-one was very concerned, because the sun was out and the river level was falling. Our guides were confident the wait to cross would be only an hour or so. It turned out to be almost three hours. But G set up the i-pod speakers, and a rousing card tournament was played on the hood of the truck. G & my Beloved opened wine we had planned to save for Christmas dinner. They made wine glasses out of plastic water bottles sliced in half, and we toasted the lowering sun and the hippos wandering around the riverbanks. 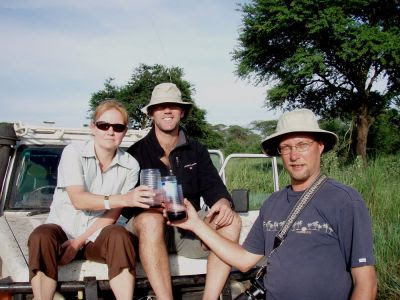 Crossing the flooded bridge we held our breath. No problem. But a few kilometres further we came upon another stopped line of vehicles. Road wash out. Our fabulous guides knew another route around using the flooded back roads. 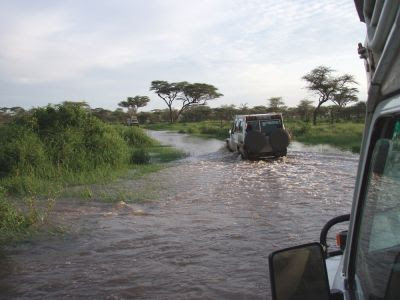 There were more wild rides with the wheels spewing huge arcs of spray. A flat tire. Then we picked up a stranded Chilean / Spanish couple whose truck had broken down. The final stretch in the dark along a soaked track was eerie, with wildebeest and zebra scampering in and out of our headlights.

Finally, exhausted, we pulled into the lovely old Ndutu Lodge, where a decadent Christmas buffet was waiting. We pulled the Christmas crackers, put on the goofy paper hats and read the lame jokes. Just like Christmas at home. Well, except for the genets lounging in the rafters. 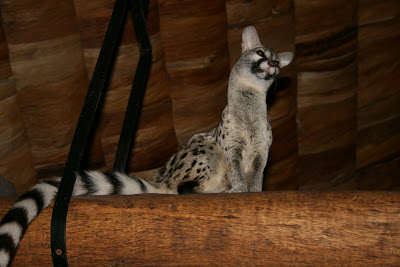 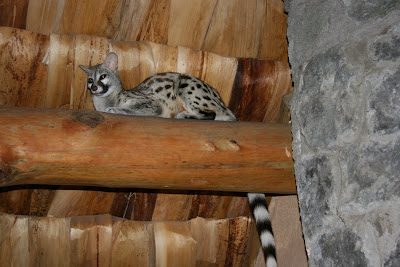 (Photo # 1 & 4 courtesy of our friend and fellow adventurer G. Vandegriend)
Posted by Voyager at 6:54 PM

I have never seen nor heard of a genet. They look feline but not quite. Please tell more!!!

That has to be the coolest 'vacation' I've ever heard of. I feel rather sorry for the poor starched suits at the reallyexpensive lodge. What fun and adventure they missed.

Hi Diana, thanks for dropping by. The genets look and act like cats, but they are actually part of the mongoose family. They eat mice and rats and snakes. Good to have around! Apparently they have been hanging out in the rafters at the open dining area at Ndutu lodge for generations.
And yes, it was a fun adventure. Especially looking back at it now from my warm dry den!

Your adventures make me wonder if it would be feasible for me to pack my kids up and take of for Africa....right now!

Go for it Teri! I have those kinds of thoughts daily.
When my son (now 20) was younger, I dragged him all over on various adventures. I hoped that it would broaden his mind and teach tolerance and respect for different cultures. Maybe it did. But I think the memory that stands out for him above all was when he was 14 and I inadvertently booked us into a hotel in Isla Mujeres filled with Scandinavian tourists. Topless, blonde beauties sunbathing and playing beach volleyball. Ask him today about the Mayan ruins we visited on that trip, and he'll likely answer: "Huh? There were ruins?"
V.

Wow, you really are a voyager! I love your pictures, particularly the happy baboon. Amazing...

You've been added to the 2000 Bloggers Project. You can see for yourself at www.2kbloggers.com tomorrow morning your photo should be available.