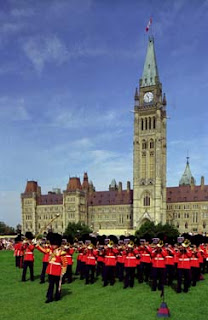 I am in Ottawa, for a working weekend of meetings. The lap top I am using belongs to a colleague from Montreal, and it only speaks French. Yes, I mean the computer. All of the Blogger dashboard is in French. At the moment I am récupérer le message. Which sounds way sexier than the English version.

The above was written on Saturday, and I gave up on the French version of Blogger when I tried to upload photos. I can manage a little light conversation in French, but geek French is beyond me. 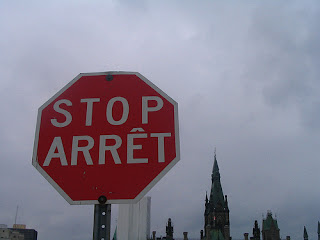 At my meetings there were six of us, from across the country. One is Francophone, three are bilingual in both official languages, also one speaks Hindi, one German, and another Mandarin. You gotta love this big multi-cultural country.

Our Francophone colleague delights us with his translations of French expressions. Once he thanked me for some work I had done "from the bottom of my hearth." And he had us in stitches when he declared he was "as happy as a veal running across the prairie." Apparently there is a French expression "happy as a calf running across the meadow." We should adopt that don't you think? It makes more sense than "happy as a clam." And conveys a more pleasant image than "happier than a pig in shit."

I've made bigger language gaffes. Once I was having dinner in a restaurant in Quebec with my parents, who are bilingual. At the end of the meal I announced loudly "Je suis plein" (I am full). My mother informed me I had just proclaimed in local slang "I am pregnant".

Today's dream travel destination: Paris. Where I would receive haughty stares for mangling the language. But who cares. It would be Paris. In April. 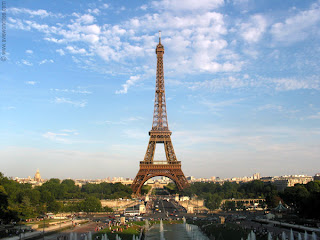 Everything sounds sexier in French, even a computer. Of course, I speak no French, so this would quickly wear thin...

I live in Montreal and I never heard that expression to mean pregnant. I've never heard it otherwise than meaning I'm full. Maybe it's no longer used...

So you can come to Montreal, eat, and say je suis pleine and I promise no one will bat an eye.

Jazz, I think it must be an old expression. My mother lived in Quebec as a girl, but that was more than 70 years ago. I see by your comment I used the masculine spelling of pleine in my post by mistake. Which really could not mean "I am pregnant!"
V.

Does it have a real French keyboard? I was in Brussels in November and went to use the computer in the lobby and couldn't understand why everything was screwed up. It then came to me that the French (in Europe at least) don't use the 'qwerty' system. As an old touch typist I was nonplused.

I knew someone Frecnh who used the expression "have a cow," and when I asked about it he thought it just meant to own a cow. I explained the "have" meant to give birth and he said, "But that would hurt!" I almost fell off my chair laughing.

Ian, yes, it had a French keyboard, with the three different keys for the letter "e". Very confusing!

CS, I never knew what "have a cow" alluded to before. I knew it meant to have a fit, or go berserk, but not why. Having a cow would certainly do that!